Over the Christmas/New Year break I read Shadows by Paula Weston. Once I read the first book, I was hooked and ended up devouring all three within a few days. I’m very excited about the release of the fourth and final book Burn. Here’s my review on Shadows –

Positives – First off the cover was different and I really liked it. It gave you an idea of what the book was about and wasn’t the conventional ‘girl in gorgeous dress’ design. I loved that this book is set in such a beautiful real location and the description of the landscape was fantastic but I may be a bit biased considering it’s almost local to me. I enjoyed Paula Weston’s writing style and the characters were fairly well developed. The storyline was fast paced and there were quite a few unexpected twists in it. Paula has obviously put a lot of research into this book and I loved that her concepts were based from real writings and teachings, etc.

Gaby was an interesting protagonist who was refreshingly down-to-earth and relatable. Her reactions to the situations she was thrown into were smart and understandable. She is a well-developed character with a unique story.

Rafa was a very sexy love interest and although it was predictable from the start that the reader would learn to love him, I enjoyed going through the journey. The cliff-hanger at the very end was exciting and I found myself staring in to space contemplating different scenarios that might happen to Gaby and Rafa in the second book, even long after finishing the first.

Negatives – I couldn’t find many negatives about this book. There was a few small inconsistencies and even one part seemed like it was missing at least a whole paragraph although it didn’t affect the overall storyline at all. I found with some of the characters – for example Daniel – he wasn’t as developed as I would’ve liked. The ending was a bit complicated and left the reader with some confusion about concepts that were only added at the end. There wasn’t enough time to explain the new revelations properly but I’m sure it will all make sense in the second book.

Overall – This book rates as a 4 – 4.5 star book. It did have some negatives but overall I really enjoyed it. For me to thoroughly enjoy a book I need to feel that the storyline is based on reality, giving the reader the sense that it might just be possible. This book was just that – real yet imaginative. Shadows is Paula Weston’s first book which means she will only get better. I’m very excited to read Haze! 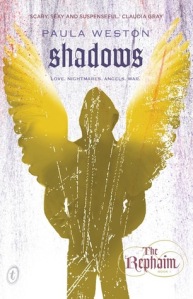 It’s almost a year since Gaby Winters was in the car crash that killed her twin brother, Jude. Her body has healed in the sunshine of Pandanus Beach, but her grief is raw and constant. It doesn’t help that every night in her dreams she kills demons and other hell-spawn.

And then Rafa comes to town. Not only does he look exactly like the guy who’s been appearing in Gaby’s dreams—he claims a history with her brother that makes no sense. Gaby is forced to accept that what she thought she knew about herself and her life is only a shadow of the truth—and that the truth is more likely to be found in the shadows of her nightmares.

Who is Rafa? Who are the Rephaim? And most importantly, who can she trust?

Fast-paced and gripping, Shadows, the first book in the Rephaim series.

This site uses Akismet to reduce spam. Learn how your comment data is processed.