Getting Too Emotionally Involved With A Fictional Character — February 6, 2015 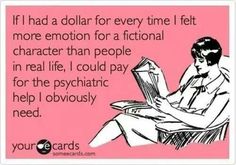 Getting Too Emotionally Involved With A Fictional Character

I recently finished a book (Dream Thief by Maggie Stiefvater – which I’ll review soon) and I’ve come to realise that maybe I get a tad too emotionally invested in books and their characters. It hasn’t only been with the two Raven Boys Series books but I have found a character in them that I loathe when I don’t think that’s what the author intended.

This character, Adam Parish is a rude, disrespectful character and I can’t seem to get past my feelings toward him in order to properly enjoy the story (although I’m not overly impressed by the books). I should probably wait to see how the series ends before I make a final judgement but it is the backbone of his personality that frustrates me and if he does change then I don’t think that would be believable.

Who else has a character that they hate when the book dictates that you shouldn’t?

Advertisement
The Moment You Realise Your Character Isn’t Actually A Real Person — December 11, 2013

Recently I’ve found myself wondering how “Alex” is going and what she’s been up to. The problem with this is that Alex isn’t actually a real person. She is but a figment of my imagination or my current favourite character. I’m proud to say that I’ve written a whole 100,000+ word manuscript and edited it basically. I absolutely loved writing this manuscript/novel/whatever you want to call it. I’m a new writer and this was my first proper size piece of writing. Somehow my brain thought up an exciting story that I personally really enjoy reading (and writing). Maybe it’s because I’m new at this, maybe I don’t have exciting enough friends or maybe it’s even that I feel I can relate so much but regardless of the reasoning the result is that my main character Alex is like a best friend to me. Oh how sad I know. Yes Alex is younger than me and certainly cooler than me but I just feel so connected to her in more than a creator kind of way. She’s so much more than just a made up character in a book and the novel (I like that term better although calling it a book at the moment is just a little too pretentious). The novel is a series (hopefully the name Harlequin sticks) and the first one ended in a bit of a cliff-hanger. There were a fair amount of answers but hopefully for more than just me, it ended making you want to read more. I have so many ideas, plots and subplots to write in and I have started, only just but still started, writing book 2. Another book idea has since come to me and I got side-tracked and have ended up writing a new novel. In both of them the main character has been a female who is psychologically strong but that’s where the similarities end. In this new manuscript (Surrender) the main female is called Temi and as much as I love her, I sometimes let my mind drift away to where Alex might be. Temi is ethereal and dutiful; Alex is fiery and righteous. Surrender doesn’t have a sequel (well so far I plan to leave the ending how it is) whereas with Harlequin, Alex’s journey is far from over. Alex has a love triangle and I have spent countless hours trying to decide if or who she ends up with. My poor husband has sat patiently and listened to me try and rationalize my decision only to change my mind an hour later. From the small amount of experience I’ve had with writing, I mean like under 200,000 words small, I’ve found that my brain makes all the decision for me and they seem to bypass my confused thoughts and head straight down to my fingertips where it becomes a story. Sometimes I stop to read my work and find myself saying ‘that’s really cool and exciting, how did I come up with that?’ When I am doing a read-through of my book so see if it makes sense, I find myself asking what happens next only to be disappointed because I don’t have to wonder, I wrote it. I want to look forward to seeing what happens but then I realise that I’m in charge so I get to decide.

My goal when it comes to writing is to create something that people love and enjoy reading so much that they, just like me, wants to know ‘what happens next.’ I hope to inspire people’s creative genius and provoke their imaginations so that while they wait to find out the answer to the question, they can fantasize about what they want to happen next. I want to widen people’s imagination. How great would it be if a reader had the same thoughts as I do today, ‘I wonder how Alex is going?’

Signing off for today to go help Temi’s story get out into the world.