That’s it I’m all outta words for today – bookwise that is. I’m having a major writer’s block, like the worst ever. I need a few thousand more words but they just aren’t happening. I’m ready to end it (the manuscript) but I don’t think I can. I’m not going to waste all this time writing something that should be a novel and not a novella. Words why won’t you come to me? Grrrr.

I found my favourite little gif to add to this blog (I apologise for those who get offended). I regret not loving when I was in the same situation where I needed to type, to get all of my ideas down as quickly as possible so much so that everything ached and I felt like the little guy who typed his fingers off. Its definitely feels like you can’t stop, unperturbed by the pain, cramping body parts and blood loss to the fingers. I want to move on, start another book (the second book in my series) but it’s not fair on this one. I’ve been dying to try my hand at the self-publishing game and I think this book is the perfect one. I’m lucky enough to have some beta readers who I know can whip through this book in no time then it’s on to trying to create a cover…. but I’m excited about it all. For that to happen though, I need a finish manuscript. I know I call my manuscripts my ‘books’ but to me they are and even if it’s not the ‘technical’ name for what they are, they’re my babies so I’ll refer to them in whatever way I think best suits them. When I first starting writing my first ‘book’ I wondered how I’d ever get the idea for another book. I was stumped but I was only half way through that one and the ideas for a second, third, etc flowed in. Slowly I started to have random thoughts about stories that would play out great. Ideas that I would be able to write 10’s of thousands of words about and now here I am. Once I finish this book I have not only the second book to start but there’s another idea that randomly fills my head, showing me the events that could happen, leading me to write a great story. 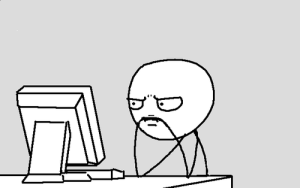 Yet now I sit here blogging, not an idea in my head for this current manuscript. It’s empty, I’ve used up all my thoughts. I really hope they replenish and SOON.

I’m going to try my hand at book reviewing and I’ve read a few books in the last week so I guess now is the perfect time to vent my thoughts on them. I guess I’ll try not to add in spoilers but they ruin a book if you’re yet to read it. I may just sit here for awhile and blog til my heart’s content.

I’m desperate to have an actual book in print although even an ebook would suffice so that I can point to it and yell “See SEE! This is what I’ve been doing!” Unless you have something to show people they seem to think you sit at a laptop all day procrastinating, playing around, enjoying spending hours on Farmville, Candy crush or the like, or even blogging (ok so maybe I like to spend some time blogging). I think blogging can be a great thing. A chance to write without rhyme or reason, not caring about sentence structure, spelling or grammar and somewhere to enjoy allowing your mind to wander while your fingers type your thoughts. I write and I write but still a print book eludes me. The first manuscript I wrote is huge and I love it! I’m so proud of my work and enjoy it so much but when I want to get it published I want to know how to go about it in the right way so that I can do it justice. That means that the new idea that blossomed in my head needed to come out onto paper or should I say screen. I’m really enjoying writing this book too but I sometimes get lost in my first idea as it’s a series. The next books need to be written as my brain clouds with ideas but not yet! Despite me nearing a decent word count for this current manuscript, it just doesn’t seem enough so hopefully once I start to edit I can add in a few thousand words. The first manuscript is well over 100,000 and I think cutting into it too much will ruin it but with this one I’m currently doing, the scenes and I ideas aren’t as plentiful. I do love this manuscript though. Don’t get me wrong, I’m proud of it and even more so once it really comes together but I hope a word count won’t hinder it’s chance in its ‘life.’ (I sometimes enjoy leaving the grammatical and spelling errors in my blogs because I feel like a rebel). I hoping for around 40,000 words but hopefully I can add to that. Is that too short? I don’t know I’m a useless rookie in this game. This book I just want to have a go at making it an ebook at seeing how I go. The first time someone buys a book of mine I think I’ll be so excited that I won’t stop partying for weeks 🙂 Fingers crossed they don’t regret their purchase though. I do have the problem of self promotion – hence why my facebook page so far has no likes (I think) because firstly I’m embarrassed at that and secondly that I’ll push my fb page into someone’s face only for them to realise that wow this writers page sucks so maybe they do too. I suck at criticism. Yeah I’m in a great industry then. I got my husband to read a few chapters of this manuscript last night. My darling husband is one of those ‘it’s perfect/amazing/fantastic baby’ and despite knowing that I still hung around him trying to gauge his reaction the whole time. My hubby isn’t exactly a book kinda person but my theory is that if I entice someone who has read about 5 books in his life to read my book then I may have written something enticing enough to draw people in. I like my theory and I’m sticking to it.

My goal as a writer (and I know it sounds a bit messed up) is to get my readers to cry over events in the book. To me that is such an honour to know that something is so well written that your readers care about the characters and what happens to them. I want them to mourn the loss of a character, chew their nails off when something scary or exciting is about to happen. So my goal is to have a print book to slap down in front of people who don’t believe I’m actually accomplishing anything and get them to read the book, feeling the intense emotions that characters feel. I want their thoughts to wander back to my story days/weeks later as they ponder about the storyline or what the character’s lives are like now.

Earning money for my books is such an added bonus. It humbles me knowing people have spent their hard earned cash on my writing. They believe that their money is well spent when they buy a book with pages filled with my crazy imagination’s ideas.

I received my certicate yesterday that say I now have a Diploma of Professional Writing (Novel Writing and Publishing). Really, really stoked about that because although it’s merely a piece of paper, it represents to me that I did it. I was capable enough to write my way through that course (which I loved). It’s given me confidence.

I wish I could find some really experienced writer friends who could tell me what I should and shouldn’t be doing. As I said though I’m not good at annoying people and self promoting. Hmm, big downfall right there. I need to create a cover for my ebook as I know exactly what I want it to look but I don’t know how to go about creating it. I don’t want to put out heaps of money for someone else to create it for me when I’m decently skilled at IT and I have heaps of photoshop etc programs although I’m a bit new to operating them. I don’t want to put out heaps of money at the moment because I’m already a financial drag on my dear husband who is so super supportive I always feel guilty. I know I wouldn’t even need to ask if I could spend money on anything to do with my books but I want to try doing it without using heaps of ‘our’ (as he reminds me all the time) money.

I’m also going to start writing book reviews because I love typing and reading so it seems only logical.

To my current loyal readers, followers and likers I swear I’m going to one day be even partially successful and you can say you liked me before I was big (I hope) haha.